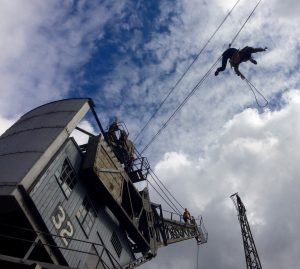 Host of angels fall to earth

Angels have been dropping their wings so they can float down to earth.  Because they can no longer fly, they have chosen an architectural structure to host their descent.  Normally they watch us silently and invisibly from above, guarding and caring for us.  Disguised in raincoats, they want to come down and meet us.  Be there to witness this; once they have landed they will disappear forever into the crowd.

‘Just saw Wings of Desire recreated by six vertical dancers on the side of a car park in Worthing. It was awesome…I love it when art changes a familiar landmark like that, brilliant.’ 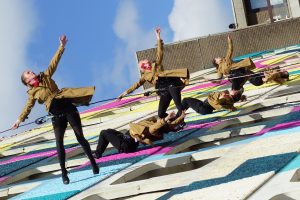 Inspired by Wim Wenders’ 1987 film Wings of Desire, Host was commissioned by Circomedia and Worthing Theatres with financial support from Arts Council England.  It was performed by Circomedia students as part of the Bristol Harbour Festival on the cranes and MShed building on 21st July 2017. Then it was performed again on the Grafton Car Park in Worthing on 12th August as part of the Summer of Circus Festival.