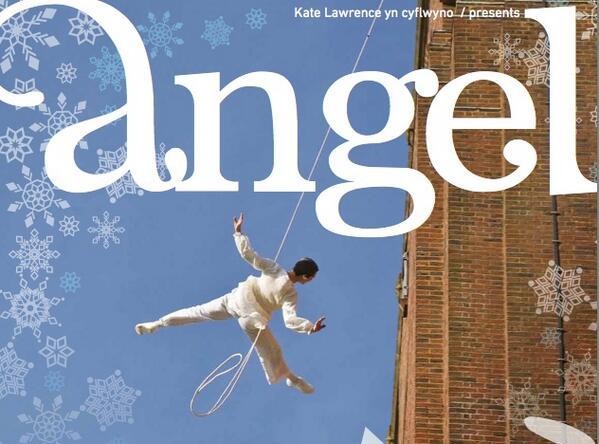 Watching over residents, surveying the land and the activities below, the angel serves as golden guardian. She appears at the top of the tower and leans back over the edge.

Gathering the breath of the wind, the angel unfurls her wings and swoops down. She dances to connect sky and land in her search for a lost soul to deliver to paradise.

Descent of the Angel was first performed on 20 March 2009 on Guildford Cathedral as part of the Guildford International Music Festival, with daytime and night-time performances. The angel descended from Guildford Cathedral twice more, in September 2009 for the British Festival of Science and July 2010 for the Society of Dance History Scholars Dance and Spectacle conference.

On Friday 19 June 2009 she left Guildford to descend from the roof of the National Library of Wales, Aberystwyth, as part of the AHRC Living Landscapes conference.
In 2012 and 2013 she was seen descending the walls of the MJC building for Les Rencontres de Danse Aerienne in La Boule, France.

On 7th December 2013 the angel descended from Bangor Cathedral

Who knows when or where the angel will descend again…

Previous witnesses of Descent of the Angel said:

‘Blew me away’
‘The afternoon performance, set against a clear blue sky with a brilliant sunshine, felt calm, gentle and warming’
‘I was mesmerised. It was like watching a feather fall gracefully through the air – tumbling and moving at the will of the air’
‘it was the most imaginative use of the building’
‘I will always remember seeing all these people scattered on the grass in front of one of my favourite places in the world, watching you descend … it was enchanting. (Even though I was mildly terrified too!)’