This project began in 2016 as a collaboration between Photonics scientist Ray Davies of the Photonics Academy of Wales Bangor (PAWB) and Kate Lawrence, director of Vertical Dance Kate Lawrence, in response to the Synthesis initiative at Pontio, that brings together scientists and artists.  Photonics is the science of light, and Kate and Ray’s primary concerns have been to discover how the invisible aspects of light might be made visible to the observer – making the invisible visible. Kate and Ray have been using vertical dance, which suspends the dancer above the ground using climbing equipment, as the vehicle for this exploration.  Looking at light sources through special glasses, the dancers disappear and we see the light dancing, putting the light centre stage. The initial project was so successful that we were invited to repeat it in 2017.

“You really must do this again – would you please consider taking this to Edinburgh?”

In 2019 we received research and development funding from Arts Council Wales to look at ways to make the work into an educational family show.  One of our principal concerns was to try to find ways to make the visual elements of the show accessible to people with little or no sight.  We worked with a composer and a musician and a story teller as well as a visually impaired mentor and aerialist.  We asked the dancers to amplify their breathing and the sounds they made on the floor.  Our designer made props such as a globe with different countries made from different textured fabrics.  We performed the work in progress twice on 11th May 2019 to an audience of families and visually impaired people.  Thanks to them, we have gathered a lot of feedback on what worked and what we can improve.

“It was quite wonderful…go and watch it now or else”

“The performance touched all the senses. It was special. It took you to another World.”

We planned to  develop the work into a family show that would have been performed in theatres in Wales in 2021, but due to the pandemic we had to change our plans, and we will be developing a film version with funding from Arts Council Wales.  Alongside this, we have partnered with Tiny City who have received a seed grant from Clwstwr to research making digital performance and other art forms accessible to blind and partially sighted people.  We are using Yn y Golau as the content for this research. 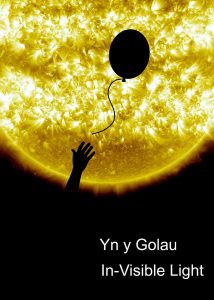