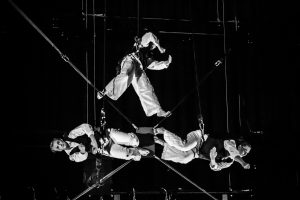 First performed as part of Pontio’s opening season in 2016 to a sell-out crowd, Llechi is a brand new visual, musical and aerial collaboration, inspired by the theme of slate and the story of Bethesda, which has a worldwide resonance.

It also acknowledges the quarrymen who, determined to building a better future for their children, contributed from their low incomes towards the founding of Bangor University – a University of which Pontio is a part.

9Bach are an alternative folk group that tour widely in the UK and internationally, and were recently nominated in the ‘Best Group’ category at the Radio 2 Folk Awards 2017, having scooped ‘Best Album for Tincian in 2015. Joining 9Bach on stage will be Lleuwen Steffan, Siân James, Caleb Rhys, Côr y Penrhyn, Vertical Dance Kate Lawrence, John Ogwen and poet Martin Daws.

VDKL worked on completely new choreography for seven songs in the show, using all areas of the theatre: the back wall the stage space the area above the stage, a tiny slate ‘dance floor’ suspended above the proscenium arch and a descent from the roof of the theatre into the audience.  It was truly inspirational to work with the music of 9Bach, Lleuwen Steffan and the fabulous Cor y Penrhyn as well as many other collaborators.